ABP Biosciences offers the nucleic acid gel stains GreenView™, GreenView™ Plus, GreenView™ Ultra, and RedView™, for pre- and post-gel staining, and SafeGreen™ and SafeRed™ loading dyes, for mixing with nucleic acids prior to electrophoresis. These stains are next-generation fluorescent nucleic acid gel stains designed to replace the highly mutagenic ethidium bromide (EB). These dyes are superior to EB by having a combination of high sensitivity, low toxicity, and great stability.

EB has been widely used for nucleic acid gel staining because of its low cost and generally sufficient sensitivity. However, EB is highly mutagenic. The safety hazard and costs associated with decontamination and waste disposal can ultimately make the dye expensive and inconvenient to use. 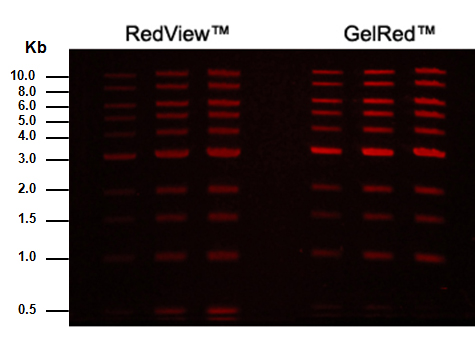 SafeGreen™ and SafeRed™ are specially formulated in 6X DNA loading buffer, which contains two commonly-used tracking dyes: Xylene cyanol FF and bromophenol blue for monitoring the progress of the gel while it is running. Gels can be directly visualized under LED or UV light without any extra staining steps (Figure 4).

Figure 4. Gel staining results with SafeGreen™ and SafeRed™ premixed with DNA ladder. 1 kb DNA Ladder (Cat# D001) was mixed with SafeGreen™ or SafeRed™ at a 5:1 ratio, then loaded onto each well. Gels were directly imaged on a UV transilluminator.

SafeGreen™ and SafeRed™ are specially designed to be impermeable to cell membranes, thus reducing genotoxicity by preventing the dyes from entering live cells (Figure 5).

Which DNA stain is right for you?