The NHS ester (or succinimidyl ester) is the most popular amine reactive group for labeling with the primary amines (R-NH2) of proteins, amine-modified oligonucleotides, and other amine-containing molecules. The resulting Andy Fluor™ conjugate will exhibit brighter fluorescence and greater photostability than the conjugates of other spectrally similar fluorophores. 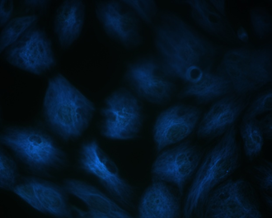